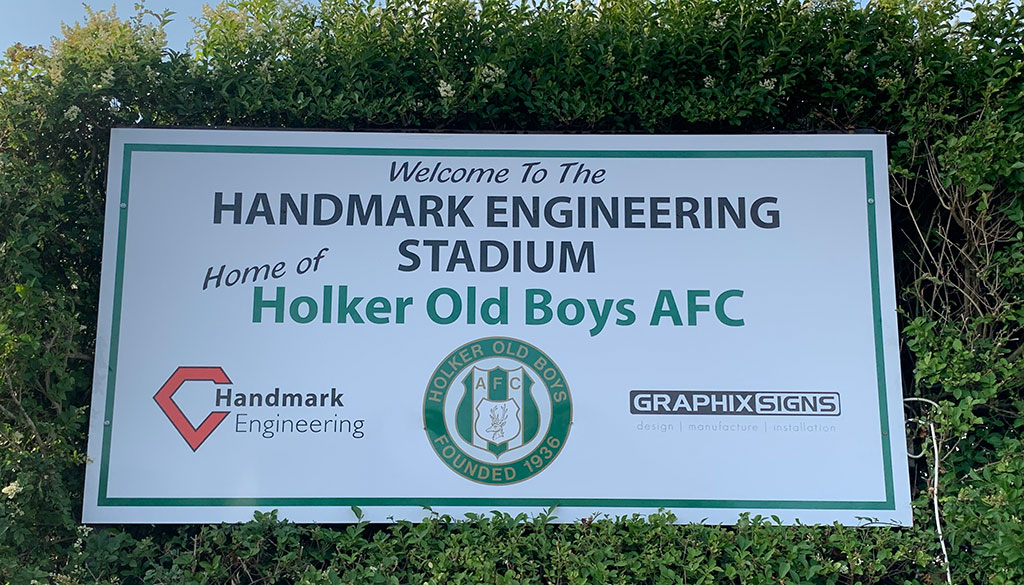 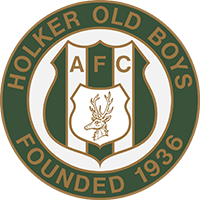 Holker Old Boys AFC was founded in 1936 as an under-16 side from Old Boys of the then Holker Central Secondary School in Holker Street Barrow-in-Furness. The school itself has long since been replaced with a Bingo Hall.

In season 1939-40, the club joined the local North Western Open Age League, playing all their games on local playing fields. Junior teams were soon formed, thus keeping the links with their roots.

1967 saw the club enter a team in the West Lancashire League whilst retaining a side in the NWL.

In 1971 a site for a new ground was obtained at Rakesmoor Lane on land which had originally been an isolation hospital and then allotments. The club moved from their previous home on Thorncliffe Road to their present one at Rakesmoor. On the formation of the Furness Premier League in 1980, the club entered two teams into this league, the Reserves and A Team. The Reserves have since progressed through the ranks and now compete in the West Lancashire League Divison 2.

Having spent years in the shadow of local rivals Vickers Sports Club (now Hawcoat Park FC.) and Dalton United in season 1985/86, they had their best season to date finishing Runners-up to BAC Preston in the West Lancs League Div 1. However, in the following season, which was also the Club's Golden Jubilee season, they went one better and finished Champions ahead of Vickers SC. More success followed as the club won the Adidas Lancashire Junior Shield in 1988/89, beating Walkden Town 2-0 and again in 1990/91 when they defeated Park United 1-0. The club were now thinking of progressing to a higher standard of football. They faced one issue - much work was needed on their Rakesmoor Lane ground to meet the required standard. Committee members, players, friends and their families worked tirelessly to extend the clubhouse, build new changing rooms and enclose the pitch. The fruit of their labour was they were accepted into the NWCFL Second Division for the start of the 1991/92 season.

Holker Old Boys took a couple of seasons to acclimatise to the new higher standard, during which time floodlights were installed. Yet, in 1993/94, they finished third in the Second Division behind Haslingden (now defunct) and North Trafford (now Trafford). Haslingden could not be promoted because their facilities needed to meet the requirements for the First Division, so Holker Old Boys filled the second promotion place. Holker gave a good account of themselves for their first three seasons in the First Division, and in 1995/96, they finished in their highest-ever position of 11th. However, the 1997/98 season saw them struggle, finishing just two points ahead of relegated Darwen, and the 1998/99 season was a disaster seeing them lose all twenty away games and scoring just five goals on their travels. Not surprisingly, Holker finished bottom of the Division and were relegated for the first time in their history. After relegation, the club restructured its finances and undertook a rebuilding period that started to bring returns. The club now has three open age sides and a Junior Section ranging from Under 6's to Under 16's plus 1 Girl's Team.

In season 2002/03, the club had its best season since 1995/96, finishing fifth in Division 2. In season 2003/04 off the field, the club secured over £80,000 in grants for stadium improvements, pitch drainage and car parking. The seasons 2003/04 to 2007/08 were disappointing on the field. The side languished in the lower half of the Division; however, there have been one or two moments to savour. Namely, reaching the 2nd Qualifying Round of the FA Cup in season 2004/05 and the successful arrangement of the game against FC United of Manchester in 2005/06 at Craven Park, the home of Barrow Raiders RLFC. This match was in front of a club record attendance of 2303. Both these events raised much welcome finance for the club, enabling us to embark on more ground improvements starting with upgrading the floodlights for season 2006/07. The club was also rewarded for its efforts at the junior level, with the commitment and effort of coaches, managers and the Committee helping to attain the FA Charter Standard Development Club Award for the junior section.

Season 2006/07 did bring some success for the U18 side. They were a blend of many of the previous season's U16 and U18 sides when they lifted the LFA Furness Building Society Youth Cup. Because of the loss of several older players, at the end of season 2005/06, to lower levels of the pyramid, many of the previous season's U18 side also played in the First Team in season 2006/07. This may account for their success in the Youth Cup, having gained from the experience of playing Open Age football. The success of the Junior Section in producing quality players was beginning to show in the First Team, as was the case in season 2008/09, when they finished ninth in the renamed Vodkat League First Division, their highest league placing since season 2002/03.

Achieving steady progress under the management of Dave Smith and his assistant Maurice Watkin over a season and a half to finish 3rd in the 1st Division in season 2010/11. Dave had to step down because of a job offer in the States at the end of that season. He handed the reigns over to new manager Jon Balm for season 2011/12. However, things didn't go well for Jon, and a run of poor results ended with his resignation in mid-November 2011. Dave Smith's job across the pond didn't prove to be as good as promised, and he and Maurice Watkin stepped back into the fray to steady the ship and finished the season in mid-table. Season 2012/13 was a disaster from a League point of view, with the club just managing to avoid the wooden spoon right at the end of the season. The FA Cup provided the only solace with progress to the 1st Qualifying Round netting the club nearly £3000 in prize money.

The 2013/14 season saw new faces in charge. Dave Smith and Maurice Watkin moved on to the Committee, and Gary Fawcett and Stuart Roberts took charge to propel the side to a respectable 6th place and the semi-final of the NWCFL 1st Division Challenge Cup, with the fresh signings brought in to bolster the nucleus of the squad that they retained. 2017-2019 has seen the club make massive improvements: from the pitch standards to the club bar having a refurbishment and the kitchen being extended. Chairman Maurice Watkin ensures the club maintains a modern, warm welcome.

In the 2018/19 season, the club hung on by a thread to stay in the NWCFL. They were also presented with a glass trophy for playing their 1000 league game in the NWCFL. With the manager moving on and Kevin Watkin, Paul Southward and Glyn Dixon taking charge, the lads hung on and sat comfortably above relegation at the end of the season.

Directions: M6 to junction 36, A590 to Barrow until you reach Kimberley-Clark Paper Mill. Turn 1st left into Bank Lane, signposted Hawcoat and Barrow Golf Club, At the T junction turn left into Rakesmoor Lane. Ground 200 yards on the right.

Parking Facilities: Parking is available in the grounds car park