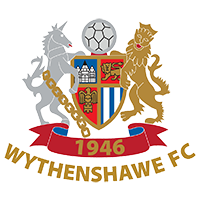 Originally founded in 1946 as Wythenshawe Lads' Club by Reg Gauntlet, a local window cleaner, gathering together a group of kids kicking a ball about in the street, started playing friendlies, held meetings with parents in a wooden hut in the grounds of Cringlewood House, Yew Tree Lane. They then set up home by hiring a room in an old farmhouse in Daine Avenue, Rackhouse. A couple of years later Noel Timpson, of Timpson Shoes, purchased two ex-WW2 Nissen huts and sited them within the farmhouse grounds.

In 1949 as the lads grew into maturity and no longer eligible for Lads Club football Harry Dalton developed them into 'The Ammies', they changed their name to Wythenshawe Amateurs, managed by Jim Cooper, to provide football for all ages. Dalton was a Sheffield Wednesday supporter hence the Ammies royal blue & white striped kit.

They became members of the South Manchester and Wythenshawe League 1949-53 racing through the lower divisions, top goalscorer being Bob Halliday with an incredible 72 goals in season 1951-52, before securing the First Division Championship in 1953.

They then entered the Altrincham and District League 1953-54.

In 1956 Wythenshawe played Manchester United, including Bobby Charlton, in the Altrincham District FA - Whitaker Cup Final. This was a great day for Wythenshawe because not only did they hold a very talented United team to a draw but according to press reports at the time were quite as good as their opponents. After two lots of extra time the score was 1-1, the cup was shared with each team holding it for six months.

The senior section alone have won over 50 trophies. Arguably one of their most successful seasons came in 1989-90 when the first team, managed by Ray Mallalieu, achieved the treble by winning the Lancashire Amateur Cup, Manchester League Premier and Gilgryst Cup, whilst the reserves added the second division title and the Sunday team winning the Wythenshawe and District Sunday League Challenge Cup.

Although youth teams have sporadically existed since the Lads' Club days, In 1989 Stephen Hall and Jim Roberts formalised a Junior Section at the club, entering one team, Under 9’s, in the Timperley and District Junior League. In 2019 the youth team entered the FA Youth Cup for the first time. In 2022 the youth development squad became the clubs first team to win a regional league division, champions of the North West Youth Alliance Development Division, and were also finalist in their respective cup in their first season.

From season 1967-68 the first team took part in the FA Amateur Cup, which in 1974 became the FA Vase, in 1985 they reached the 5th round narrowly losing 2-1 away to the eventual winners Halesowen Town. The previous round saw the Ammies win 6-0 at home to Rushall Olympic before its then largest attendance of 255, tenfold their average, and producing their first ever match programme.

Due to a change to the FA's ground grading requirements in 1996 they were no longer eligible to enter the FA Vase, on top of that they could not seek promotion in the National League System from the Step 7 Manchester League to the Step 6 North West Counties League.

Wythenshawe were not deterred by this setback and planning permission was granted by Manchester City Council in October 2007 to build a 150 seater floodlit stadium in Hollyhedge Park. Raising sufficient funds to build this facility, even to simply fence in the ground, was an on-going problem, being adversely affected by a recession.

In 2009 a Ladies team was formed, managed by Paula Mercer, in 2011 became champions of Cheshire & Manchester Women's League Division Two East and finalist in their respective cup, then transferring to the Cheshire Women’s & Youth League. In 2018 they finished runner-up in the CW&YL and promoted to the North West Women’s Regional League, also entering the Women's FA Cup for the first time, beating Accrington Stanley at home 5-1 in the preliminary round then bowing out in the 1st Qual.Rd v. Accrington Girls & Ladies at home 1-3 before the women's then record attendance of 142.

In June 2011 the club changed its legal entity from an unincorporated association to that of a private limited company by guarantee, with charitable status. The company dissolved in November 2019.

In July 2013 Committee member John Cotton noticed an article for a Budweiser £50,000 regional grant he felt the club could win, he passed the article to then Vice-Chairman Carl Barratt who took up the mantle. Fortune struck on Halloween that year, which changed the future of the club forever, when Barratt received the news that he was successful in winning the grant, this also enabled the club to compete against seven other clubs nationwide for an additional £100,000 in a public Facebook vote during February 2014, they obtained the most votes and secured the additional funds.

The club in 2015 introduced the 'John Walker Tournament', an annual nationwide summer festival of football for children and youths aged 7-15, attracting over 100 teams with over 1,000 players.
A further honour bestowed upon ‘Mr Wythenshawe Amateurs’ was the naming of the main stand ‘The John Walker Stand’ in 2020.

The football and cricket clubs workable relationship, in its latter years, became strained and subsequently the Ammies were rendered homeless when evicted by the cricket club in May 2015 after 32 years use.

The Hollyhedge Park Project was now, more than ever, an increasingly important chapter in the clubs future. Whilst the project was coming to fruition games were played at Flixton FC and St. Paul's High School, with hospitality at the Winston Conservative Club and Northenden Social Club.

The penning of this crucial chapter recommenced in July 2016 when the club secured funding of £812,000, which included £382,317 from the Premier League & The FA, the £150,000 from Budweiser, £146,000 from the National Lottery, building work began in earnest in February 2017 for a clubhouse, new pitch, drainage, car park and fencing when a new long term lease was finally agreed with Manchester City Council.

The stadium was completed in September 2017, the first match was played on 30th, drawing 1-1 v. Hindsford in the Manchester League, the 32 year old record attendance was broken with 277. Further improvements brought the ground up to Step 6 standard and was officially opened on 6th May 2018 by former England & Manchester United captain Bryan Robson.

Promotion was gained in May 2018 when the FA allocated the first team to a restructured North West Counties Football League. This meant that the club was competing at semi-professional level for the first time, whilst retaining their amateur status they finished a creditable fourth in the First Division South in their first season.

In 2019 the first team returned to the national stage when they re-entered the FA Vase.

The following season 2020-21, they were accepted, for the first time, into the FA Cup, in the Extra Preliminary Round beat Shelley at home 4-2 in a memorable penalty shootout after a 1-1 draw in 90 mins, exited in the Preliminary Round v. Trafford at home 1-4.

The first full season, 2021-22, following two coronavirus pandemic hit seasons, they reached the play-offs, losing to FC Isle of Man in the semi-finals.

The first team have never been relegated in its 77 year history.

Directions: From Manchester : Travel south towards the airport along Princess Road/Parkway (A5103), exit at Junction for Sharston, left at the 1st roundabout onto Altrincham Road (A560), straight ahead at 2nd roundabout, right at 3rd roundabout, through first lights then immediate leftat second lights, still on Altrincham Road, Ground is approx. ½ mile on the right.

From the South : The M56 to Junction 3A for Wythenshawe, right at the roundabout for Sharston onto Altrincham Road (A5600) then as above