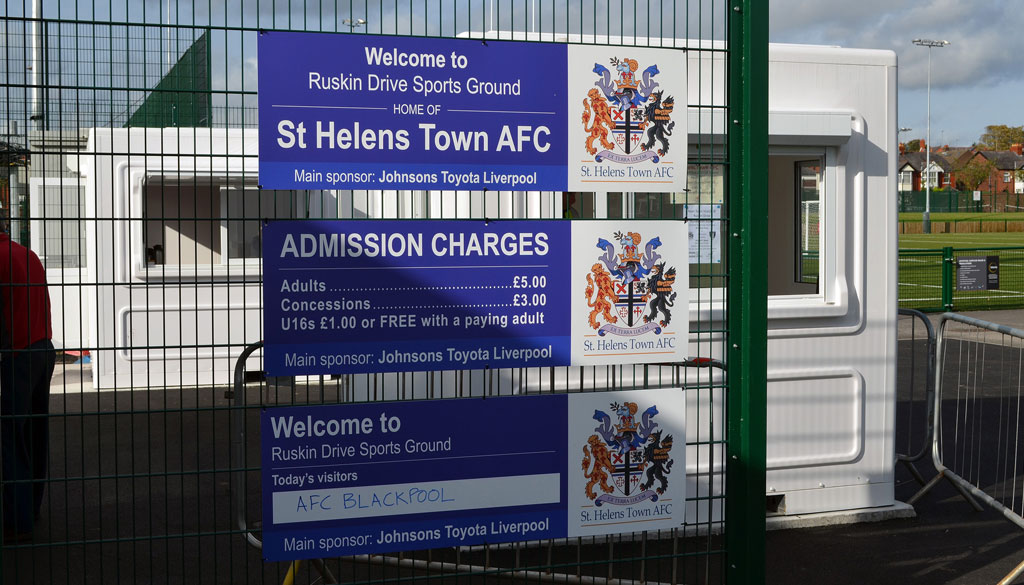 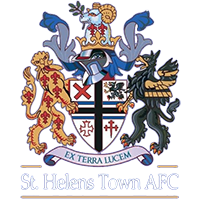 The original St. Helens Town club was formed in 1901 and played at Park Road, behind the Primrose Vaults public house. Although it was known as the Primrose Ground, the players changed further down Park Road at the Black Horse pub. Playing in the Lancashire League and Lancashire Combination, the team enjoyed some early success, but struggled after the Great War and appears to have folded midway through the 1928/29 season.

The club was re-formed by George Fryer and a group of local businessmen in 1946. They took out a lease of the former cricket ground at Hoghton Road, Sutton, adjacent to the St. Helens Junction railway station and, although it entered in the FA Cup in the 1946/47 season, a team could not be raised in time to fulfil its tie with Prescot Cables. Friendly games were played, then local team Derbyshire Hill Rovers were taken over in April 1947, those players forming the nucleus of the team which entered the Liverpool County Combination at the start of the 1947/48 season. St. Helens Town soon began to prosper and early results included a sensational 10-4 win over Everton “A” on 6th December 1947. Former German prisoner-of-war Bert Trautmann joined the club in the Summer of 1948, the strapping goalkeeper helping the team to win its first trophy, the George Mahon Cup, which was secured with a 2-1 win over Runcorn at Prescot on 7th May 1949. Crowds averaged over 2000 that season, peaking with a league record attendance of 3012 against Burscough in October 1948.

The following season, 1949/50, Town entered the Lancashire Combination and, despite losing Trautmann to Manchester City in October 1949, they won the Second Division title in some style the following season, three players, Albert Leadbetter (36), Harry McCann (32) and Terry Garner (31) all netting over 30 goals apiece. An all-time club record attendance of “between 8000 and 9000” witnessed a friendly game against Manchester City, arranged as part of the Trautmann transfer deal, in April 1950 and another 4000 witnessed a second match with City the following season. Although relegated by a slender margin from the First Division in 1951/52, the club continued to look forward, even contemplating Football League status and, in order to further its ambitions, moved to the former St. Helens Recs. rugby league ground at City Road. Initial crowds were encouraging but, despite success, the club decided to move back to Hoghton Road in October 1953, where they remained until April 2000.

Town produced a number of fine players who joined Football League clubs, including Bill Foulkes (Manchester United), John Quinn (Sheffield Wednesday) and John Connelly who joined Burnley, later transferring to Manchester United and who played in the England 1966 World Cup winning squad. More recently, Dave Bamber scored goals in all four divisions of the league with a host of different clubs, starting and ending his league career at Blackpool and in the last few years, Karl Ledsham, who had a productive career at conference level with Southport, Lincoln City, Barrow and Stockport County before moving to the USA.

Following a second relegation in 1956, St. Helens Town continued to play in the Lancashire Combination, winning the Championship in 1971/72, by nine points ahead of Accrington Stanley. However, the formation of the Northern Premier League in 1968 led to a gradual drain of stronger clubs from the Combination and St. Helens joined the Cheshire League in 1975, becoming founder members of the North West Counties League seven years later. They held the proud record of being the only club to play in the NW Counties’ top flight every season until they were relegated in April 2015, conceding an injury-time equaliser to Silsden in the last game of the season, a match they had to win to stay up.

Town enjoyed a golden era in the late 1980s, just missing out on an appearance in the First Round proper of the FA Cup in 1985/86, losing to Morecambe in a Fourth Qualifying Round Replay, but they obtained ample compensation by winning the FA Vase at Wembley in 1987, beating near neighbours Warrington Town 3-2, with two goals from Phil Layhe and one from Brian Rigby. They were regular promotion candidates for many years, largely due to the scoring exploits of Steve “Pellet” Pennington, who grabbed 216 goals in 351 games, his season’s best hauls of 45 in 1993/94 and 46 in 1997/98 just failing to beat the club record of 47 scored by Phil Stainton in 1963/64. Former club captain Andy Gillespie won the NW Counties’ golden boot with 34 goals in the 2015/16 season and netted another 24 times the following season, whilst the 2017/18 season saw Shaun Brady only just miss out on the player-of-the-season award in the First Division.

Town moved from Hoghton Road in 2000 and ground-shared with Saints Rugby League club pending an intended move to their new stadium, which took many years longer than anticipated and finally moved out of Knowsley Road when it closed in September 2010. Plans for the move were shelved following a disagreement and Town went on a nomadic existence, playing out of town at Ashton Town, Ashton Athletic, Prescot Cables and odd games at Atherton Collieries, before St. Helens Council redeveloped the Ruskin Drive multi-sports complex and St. Helens Town moved back home there in August 2017, playing on an artificial 3G surface.

Last season saw Town start off well with victories at much fancied Lower Breck on the opening day of the season followed with a home win over Atherton LR and draws with Bacup Borough & AFC Darwen before a run of five losses brought them back down to earth and it was to be a season of battling it out at the wrong end of the table. Safety was secured with a 3-0 win at Atherton LR at the start of April and this season sees Town in their fifth term at Step 6, aiming to put behind them four seasons of inconsistent performances and regain their Step 5 status. Lee Jenkinson took the decision to step down at the end of September 2019 and was replaced by Dave Platt who took the step up from reserve team manager.

Platt’s first match in charge saw a blockbuster 8-3 victory over AFC Darwen in Macron Cup action but the youthfulness of the squad and lack of experience was a problem at various point during the season and despite promising green shoots of growth the club were bottom of the First Division North by the time the season paused and was eventually declared null and void due to the covid pandemic.

Hopes were high for the 2020-21 season and despite the high of being back in the FA Cup and defeating Cammell Lairds in the Extra Preliminary Round the season was stop, start due to Covid before being curtailed with Town having played less than 10 matches in all competitions.

2021-22 sees Town in their eighth season at Step 6, the NWCFL First Division North, aiming to put behind themselves a number of seasons of inconsistent performances.

Manager Dave Platt brought in new assistants in Curtis Lopez & Phil Clarke after a poor start to the season and recent results have shown an uptick as Town look to maintain their ever-present record in the NWCL.

<b>All traffic</b> should then follow signs for St. Helens, passing into one-way system, keep to the right hand lane entering Denton's Green and make a U-turn where the road opens out by the bus shelter, take the left lane and Ruskin Drive is second on the left after Rivington Road From St. Helens town centre, take A570 Southport Road.

Ruskin Drive is on the left about half a mile from Asda in the one way system.

Nearest Bus Route to Ground: The 37, 38 and 38A buses go past the end of Ruskin Drive, heading towards Eccleston and Rainford and back into town from Greenfield Road after the game

Ground Facilities: The facilities are part of the Ruskin Sports Village site operated by St. Helens Council, with bars and refreshments provided by sole concessionaires Ruskinvest Limited. There is a 200-seater covered stand and the overall ground capacity is 647 with standing on three sides only